The exhibition “Bob Ross Made Me Do It” is the continuation of Daniel Cherbuin’s maverick work, whereas his latest oeuvres are far more complex. His 'popesque' images, assembled with monitors, are full of complex semantic levels and manifold codes, which are discovered only bit by bit. The divine films made of found footage, the quotations from early pop art, the usage of current images from the collective awareness of pop culture and a confident sense of humour are characteristic for his work – a sense of humour that finds expression both in smart allusions and cracking puns.

It is a Pun, when you create a display showing a sixties pin-up girl with the headline “After Hours“. Where the girl's anus (in German 'After') should be, there is a headphone jack accompanied by the sentence “PLUG IT IN!“.The work's title takes the pun even further: The happy exclamation mark rebellion of the sixties with statements such as “Be in!“, “Sleep in!“ or “If it feels good, do it!“ are narrowed down to the rather satirical “PLUG IT IN!”. Thanks to the popular understanding of Freud, the sexual connotation is as obvious as its quality of a redirection activity. The insertion of a headphone plug into a connection jack is a redirection activity and therefore refers to the very essence of poster pin-ups: They evoke longings and desires, but the satisfaction will always remain absent. With this, Cherbuin not only quotes the commercialized sexuality of the sixties but also caricatures the criticisms, which denounced the false promises of product aesthetics and a misguided pleasure principle.

Next pun: If you plug in the headphone plug into the photography, exactly where the lady's anus should be, you have – if you take photography as gospel – inserted a foreign body into her rectum. You can then listen to the Wikipedia text ”Foreign Body in Anus and Rectum“. A text that strives to evoke a scientific tonality, its anecdotal character however makes it highly amusing.

A further pun is Cherbuin’s appropriation of Joseph Beuys’ multiple “Capri Battery“. During a stay in Italy, Beuys plugged a yellow lightbulb in a socket into a lemon and called his work “Capri Battery“, since lemon since lemon juice is an acidic solution and could and could therefore theoretically generate electricity if the plugs were made of zinc and copper. Consequently, Cherbuin used a red light bulb and plugged the wires into a tomato. His work has the congenial title “Napoli Battery“ and excels therewith Beuys banal ingeniousness, whereas Cherbuin doesn’t create a multiple. The “Napoli Battery” is displayed on a TV screen with Beuys sitting in front of it. Beuys characteristic, unfailingly recognizable persona becomes a code for the canon of the arts of interested TV consumers– the “Capri Battery” is the cause of a pun and simultaneously a touchstone of Beuys’ dictum that everyone is an artist.

This is exactly the pun’s punch line: The pun casts the sublime out of contemporary art. It reveals the pompous establishment to be a bugbear. It mocks but still uses the métier’s armoury and vocabulary. In short, Cherbuin’s puns are always fashioned by every trick in the book.

QUOTE OR: LOOK BACK

The interpretational abundance arises from the playful quotations and cross-references hidden in Cherbuin’s works. In “Look Back” for example, we see a comic (as quoted by the early Roy Lichtenstein). Mounted into the picture are recordings of Andy Warhol who drops white sheets of paper. Thereby Warhol quotes Bob Dylan. In Pennebaker’s documentary “Don’t Look Back”, Bob Dylan dropped cue cards with keywords from his song “Subterranean Homesick Blues”. Unlike Dylan’s text, which is heavy with meaning, Warhol, with his white sheets of paper, says exactly nothing. At first sight. As Warhol’s actions are however connected to Dylan’s, the white sheets become meaningful. Then we look back;, we do what Cherbuin’s work does. What every quotation does, as a quotation of a quotation, assembled into a pop-art quotation quoting a comic – it speaks volumes.

THE CASE OF DORA

Even trickier is Cherbuin’s work “But you’re still Ida Bauers as far as I can see“. The eponymous line comes from Lennon’s song “Working Class Hero“ with the original title “But you’re still fucking peasants as far as I can see“. The English ’peasant’ becomes the German ’Bauer’. Now, Ida Bauer is the real name of one of the most famous case studies in psychoanalysis, namely Freud’s “Case of Dora”, the paramount example for “hysterical shift”. Typically Freudian is also the shift from ‘peasant’ to ‘Ida Bauer’. In this work, we see the graphics of a head connected to or interacting with a symbolic circle through lines. The various semantic and semiotic levels flickering above the circle and the graphics of the head fit Freud and his Case of Dora perfectly. In the found footage the comic character “Wonder Woman” plays a distinctive role, as the artist, Dara Birnbaum declared her the feminist icon. Furthermore, we find only a micro vowel shift between Dora and Dara. This and Birnbaum’s feminist way of seeing the world would perfectly fit into the varied selection of criticisms, which dismantle Freud as an analyst and theoretician in the Case of Dora. The fact that we constantly think in common Freudian theorems and furthermore ’shift’ this and that is the punchline of the title. The other: All these allusions and cross-references we believe to find are mostly arbitrary and refer – from a Freudian point of view – to our psychological disposition and not to what is actually part of the work. Anyhow, it works either way. Especially with Cherbuin, whose works impress with aesthetics even if nothing else is read into them. Yes, the fierce chains of associations laid as traps in the titles and pictures satirize the reticence of contemporary art, which all too often pretends that the adept viewer must be able to understand every possible connotation. Otherwise, the verdict of philistinism looms. Nonsense! He does not. He does, especially with Cherbuin, not. His works as such are sufficient; the obscure meaning is just a little extra.

A supreme example for how a playful sculpture by Cherbuin can be charged with superimposed semantic levels is his work “Emitter Receiver II”, which consists of three world-famous photos:
-The Obama family watching television.

-Obama and his government in a command centre following the operation against Bin Laden.
-And finally, Bin Laden watching television in his Pakistani hideout.
Cherbuin mounts a monitor into Bin Laden’s television. The monitor displays an old Technicolor-animation of the “American Petroleum Institute” explaining the benedictions of petroleum to aliens. This extreme antithesis creates comicality: Here the dreaded sinister character and Prince of Terror, there an old animation about the advantages of oil-based society. The sculpture can be arranged in different ways: Either we have Obama with his family watching Bin Laden watching animations or, if we turn the block by 180°, we have Obama and his government looking over Bin Laden’s shoulder. The relation Bin Laden-USA is as follows: Bin Laden, who is being watched, is the content of the broadcast received by the USA. But Bin Laden was also the emitter of hijacked airplanes affecting the USA as a receiver. In the picture with his government, Obama is now the emitter of the Navy Seals who will make Bin Laden the receiver of deadly bullets.

The block showing Obama as a private person and as president refers to the distinction between private and public sphere and simultaneously belies this very distinction. We all are aware of how media works, to know that there is no such thing as a random snapshot of the President of the United States with his family. What is set up as a private setting is always public? Just as the photo with Bin Laden in front of his television leads us to believe that we see privacy but the picture must have been taken with the idea to communicate something to the public. That was not the case when the U.S. government was photographed as they were watching how Bin Laden’s hideout was stormed the moment of gunfire. This photo was not public. If the mission had not been accomplished there would be no photo. And we would not be the receiver. The sculpture has a further double character as it behaves interactively and interpassivity at once. Interactively because the viewer has to decide whether he wants to see the private family-Obama or the President of the United States. interpassivity (according to Robert Pfaller), because it is not us watching Bin Laden watching an animation, but the photo of Obama – private or president – watching it for us. Similar to a video recorder watching television in our place.

The key work “Theory and Practice” presents itself as a bourgeois parlour with a blonde lady standing beneath a chandelier. The four-hour didactic DVD “How to look at and understand great art” is displayed on the screen. In a frame above the television set we see a loop in which the popular art-instructor Bob Ross explains how to paint pictures. The title “Theory and Practice” is reminiscent of Marxist seminars. Over the headphones we hear, in one ear, Bob Ross dialectically explaining the practice, while in the other ear we have theories about the creations of a canon, how art is to be viewed and understood. Both examples show that television has outstripped museums when it comes to opinion-making, the mediation and the reception of art. We rather know art and artists from television or the Internet than reality. Cherbuin reverses this process by integrating pictures known from television into a piece of art exhibited in a gallery.

IT IS ALL BOB ROSS’ FAULT

Substantially, Bob Ross, with whom everyone can learn a little bit about art on TV, is a synonym for amateurism. And this is what the self-ironic title of the exhibition “Bob Ross Made Me Do It” wants to point out. “Bob Ross Made Me Do It” is apologetic. “Bob Ross Made Me Do It” is the antithesis to the pompous attitude with which far too many artists try to ennoble themselves and their work. “Bob Ross Made Me Do It” means: If you say you can do it, why not give it a try. However, also Beuys’ dictum “everyone is an artist” resonates positively within this work. As well as the knowledge of contemporary art, according to it, an artist does not have to be able to draw nor paint, but he has to present new and exciting aesthetic concepts. And – like Cherbuin – who does not paint a panel himself but has it made for him or appropriates it. Whereas Cherbuin is anything but an amateur: He is a skilled professional with profound knowledge of technology, he is a witty arranger and assembler of films, therefore an artist who is able to implement his concepts, one whose works draw from the canon, always allowing him to grow in the process. In short: A contemporary artist sui generis, whose creative work distinguishes itself from the herd of artists’ compliant bleating. 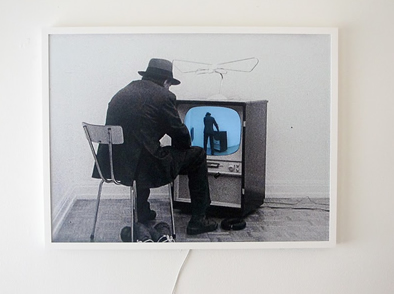 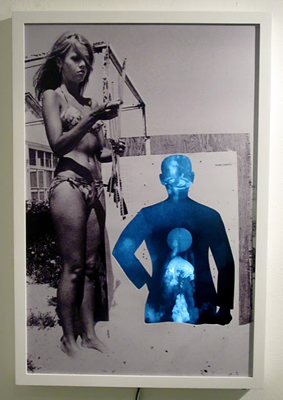 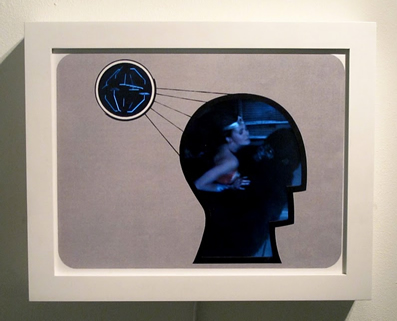 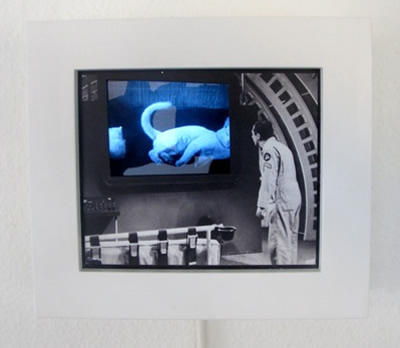 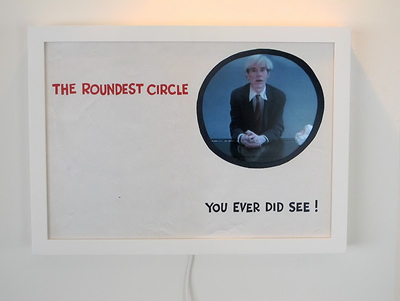 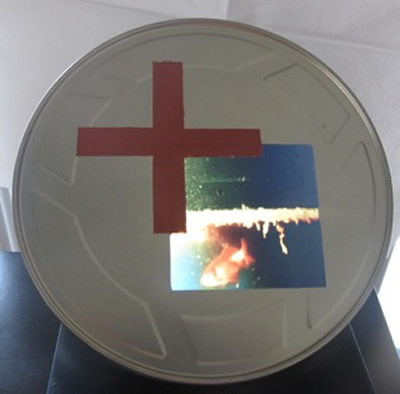 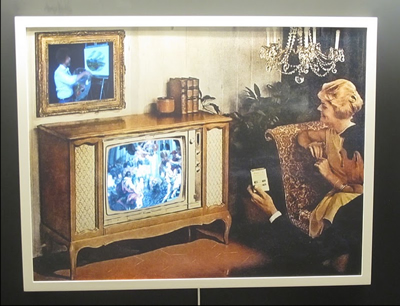