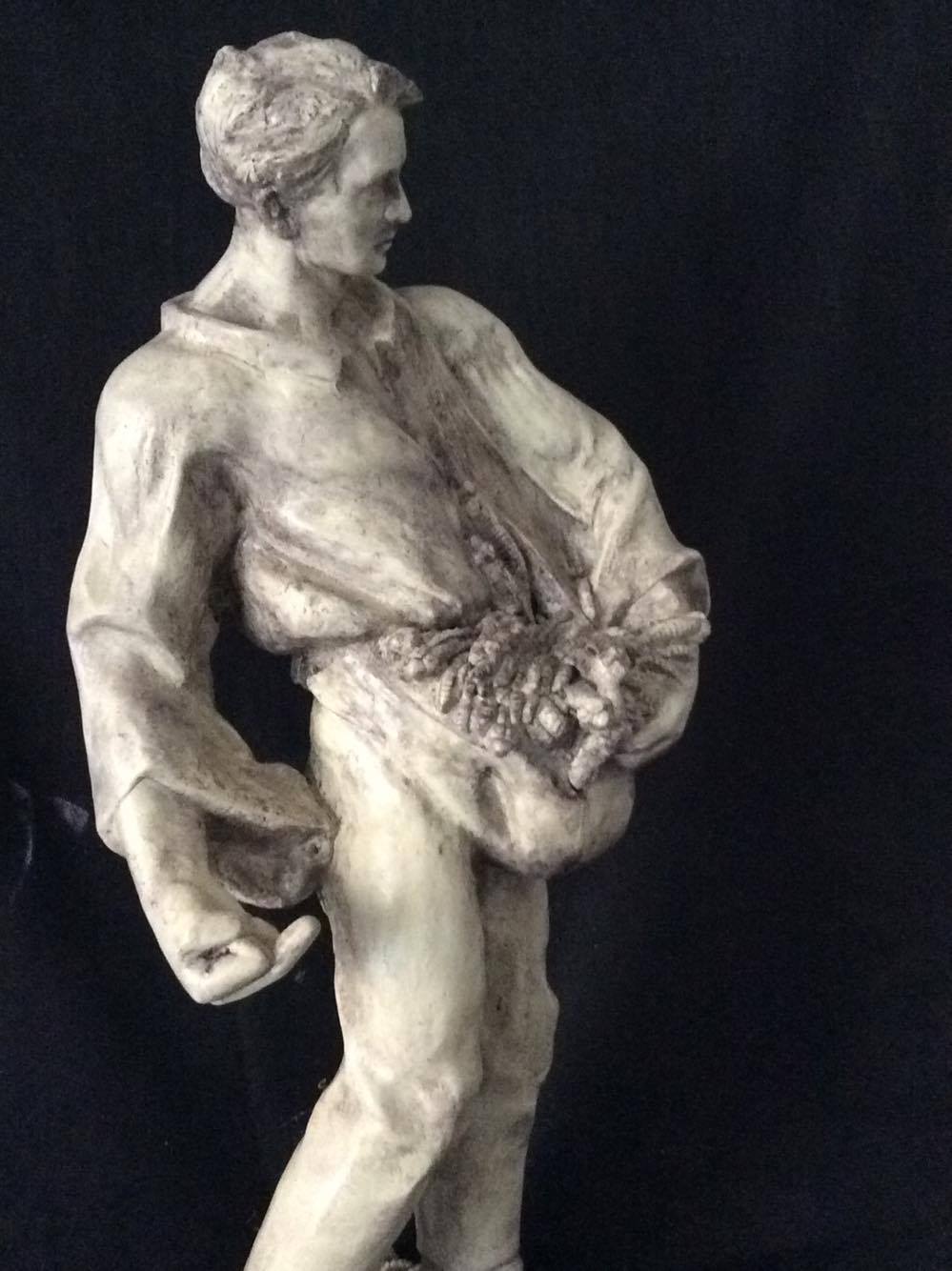 A former member of the Improbable Society in the post-Wall Berlin squat scene, where he was known for his “darkly sarcastic” interventions & performance pieces & was an early participant in the Kunsthaus Tacheles, Mark Divo’s recent work could well be described as comprising an ongoing strategy for avenging art upon the prevailing moronic world order. Having squatted the original Zürich Cabaret Voltaire in 2002 & initiated the International Dada Festival, Divo’s “paintings,” “assemblages” & “living sculptures” are frequently associated with the tradition of Dadamesse. And while he has been likened to neoavantgardists like Joseph Beuys, his work errs strongly towards the critical rather than socially – meaning “institutionally” – constructive (including its attitude to avantgardism itself). There are thus only superficial similarities between Divo’s reinvestigations of radical Dada and what, within the safe confines of contemporary art museums everywhere, passes today for “anti-art” yet which is often revealed as little more than overpriced interior-decoration in the latest international style. Divo is Kunsthaus détourned “back” into subversive meta-kitsch.

From his ironic collaborative paintings & installations of the 1990s (targeting the neoconservative postmodernism of Georg Baselitz & Julian Schnabel) – to the “post-Fluxus” data-Dada & “neo-Punk” Merzbau of the Zürich Helmhaus at the turn of the millennium – to the satiric “Gesamtkunstwerk” of the D.I.V.O. Institute during the last decade (targeting everything from Casper David Friedrich to Mondrian & Damien Hirst), Divo’s project has been one of undaunted combat-by-re-expropriation against the malaise of cynical reason & the pluralist appeasement of narcissistic oligarchic kitsch paraded as mass culture: in Roland Barthes’s terms, it is a “mythoclasm” of the postmodern condition. As noted in a 2010 catalogue entry, Divo’s “paintings” (many assembled from absorbent kitchen sponges) & other “constructions of stolen goods,” duly exhibited in guilt frames or on plinths within elaborately baroque installation environments “inspired by the do-it-yourself tradition of honorary titles,” invite comparisons to a cultural “clearance sale.”

In a world where every species of historical kitsch has come to be not only “permitted” but institutionally celebrated – under that rheumatic art-critical régime of “enlightened false consciousness” called postmodernism – the products of Divo’s Prague-based “dadaistische seminar” a.k.a. The Solution, conduct a sardonic parody of that self-gratifying Bonapartist dictum that “power is never ridiculous.” For it is the avowed mission of Divo’s anti-postmodernism to demonstrate precisely that it is, while remaining fully cognisant of the fact that all such oppositional stances, too, must ultimately (profitably) feed that insatiable, expropriative hunger for kitsch that power invariably manifests. It is, so to speak, the dialectical proof of the pudding.

Divo’s most recent installation, “Sentimental Revolution,” at Zurich’s Mondejar Gallery, broaches themes of contemporary regicide/tyrannicide and the culture of quiescent consumerism & pseudo-revolt performed in the social mediasphere. The installation is comprised of a set of three détourned socialist realist sculptures (a hipster with shopping bag, a nude girl taking a selfie, & a rustic “sower” of worms), a “woodcut” of the “Execution of the True Infant of the White House (Death of a Clown)” (referencing the 1646 beheading of Charles I at Whitehall), and a photographic diptych reinterpreting John Henry Fuseli’s often reproduced 1781 painting, “The Nightmare” (with the eponymous nightmare assuming the form of a tuxedoed skeleton in a rubber Donald Trump mask).

The overall tone evoked is of a neo-American Gothic (in the shadow of the “American Century”), in which the “impossibility” of affecting a critique under conditions of postmodern “groundlessness” cedes place to the seeming “impossibility” of parodying the machinations of power in the era of Donald Trump. Divo’s “anti-burlesque” exploits Fuseli’s psychic cliché (of the demonic “nightmare” menacing the innocent sleeper) to travesty the political innocence of contemporary American pop culture & its willing consumption of “liberal” / “libertarian” pseudo-resistance in the face of undisguised despotism (continuing that long twentieth century genealogy that also produced Niyazov, Putin & Berlusconi).

If power has always been the centre of gravity for historical kitsch, then cliché itself serves here as the centre of gravity of the proverbial return of the repressed, of which the theatricalised “nightmare” is the most conventionally recognisable form, and whose Unheimlichkeit thus serves not to disconcert but rather to solicit, like the most banal forms of consumer porn. This nightmare could just as easily be selling perfume, in a Fukuyama-esque satire on Marx’s sugar-coated “bitter pill.” We are led to consider that in the retrenched age of post-ideology, subversion belongs not to the Doppelgängers of institutional avantgardism (in whom art has long been dead), but to the incipient “aesthetic terrorism” embodied in the détournements of the ideological undead. 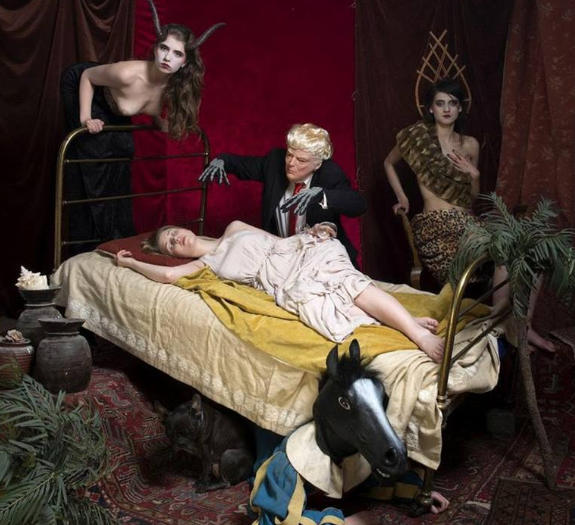 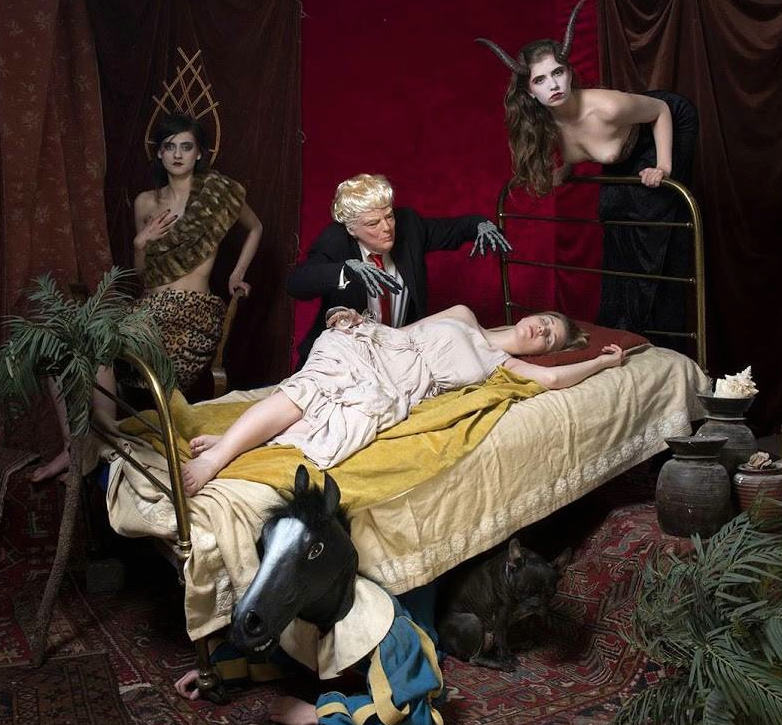 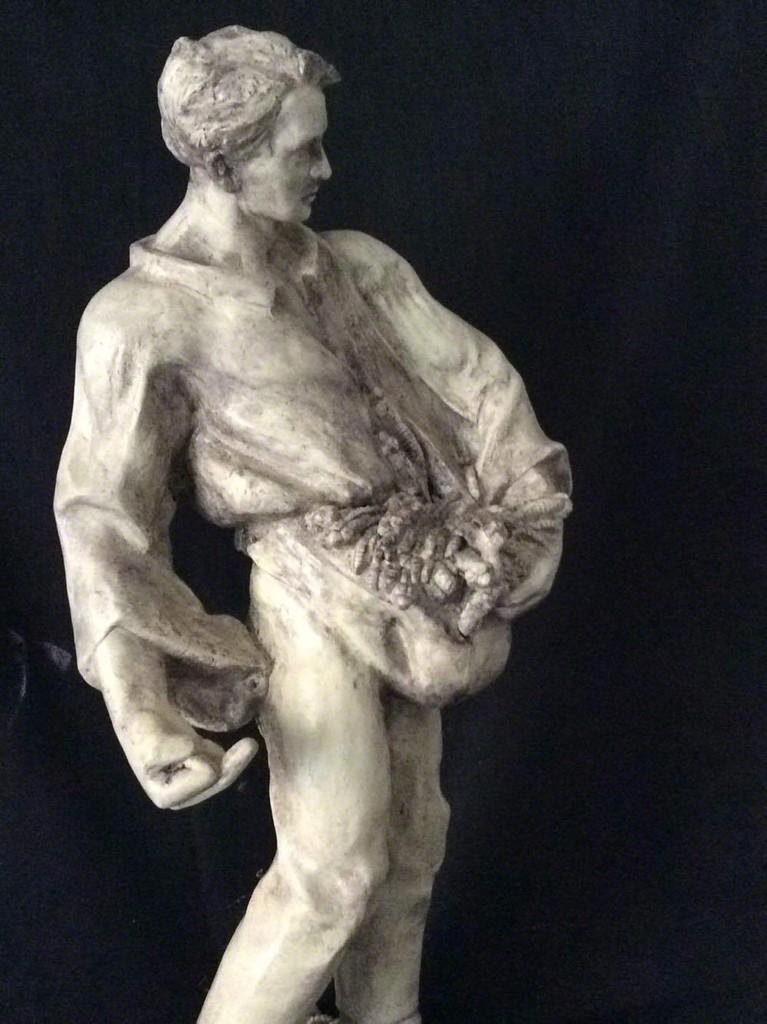 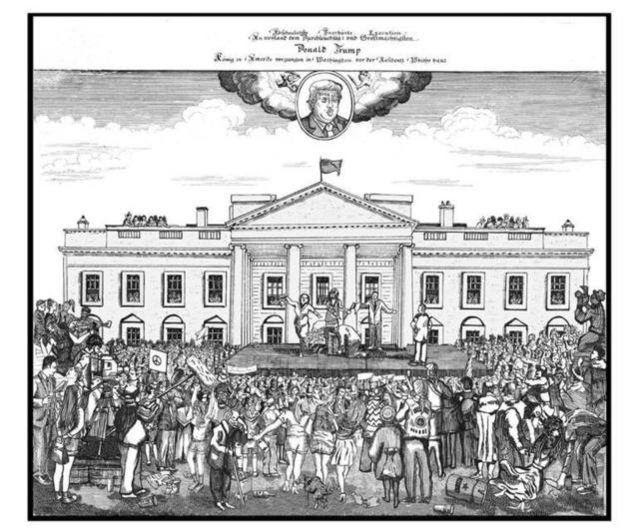