Altering the visions of sanctimoniousness
by Philip Paraan

Divinity is such an abstract and powerfully enigmatic concept and to dare alter and reframe the vision of the sacred is certainly a taboo and a transgressive act.

But for Mideo Cruz, however, an incendiary known to capitalize on frisson and disconnect, he takes the canvas to elucidate alternative readings on the sacrosanct, faith and fetishes. Cruz this time employs pop imagery and iconoclasm to represent his modern gods and to alter symbols, notions of the divine and sacred in contemporary and conceptual terms.

With his declared objective, he suggestively turns to symbol-laden images of icons rendered in industrial paint on canvas and on board, coaxed intricacy and sentient details teeming with intrigue and precocious meanings.

His visualization of his “new gods” finds resonances from his last two shows, Deities and Homage to the End of the Equinox: Destruction of the Sacred where he started tackling metaphysics and mythology.

Consistently discursive and ingratiatingly engaged as his performances, these works never elides from his conceptual rigour. Thus, whether in performance or in paint, his sustained criticality is pervasively present.

Such iconoclasm departs from his performance based production while taking the turgid visualization on canvas to articulate his agenda. Here he presents palpable images of political and cultural icons which he deems as modern allusions to whatever is held sanctimonious and ordained by the popular culture and the regime of prevailing political and social order: capitalism.

He employs devices and symbolism to underscore and amplify his re-assertion of various degrees of cultural critique and political underpinnings. For instance, his use of distending rays which takes mythological reference from the Egyptian sun god Ra has been consistently a symbol of divine power while his spirals suggest the notions of cycles and parallelisms of myth-making.

In a way wittily way possible he offers scepticism and intelligent renegotiation of perhaps irreverent truths -- that is images of gods are no longer can be found in churches and in temples, they what/who men choose to deify or fetishes oftentimes impinged upon humanity itself. 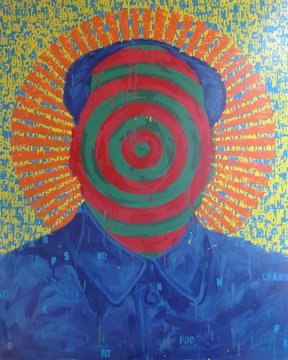 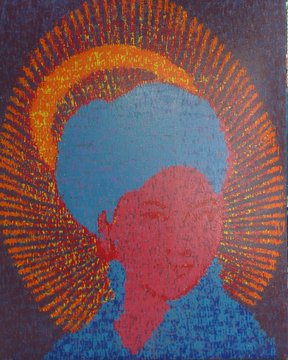 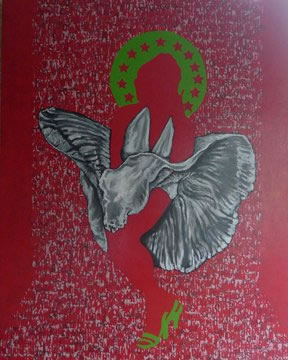